By Reagan McCarthy for Townhall 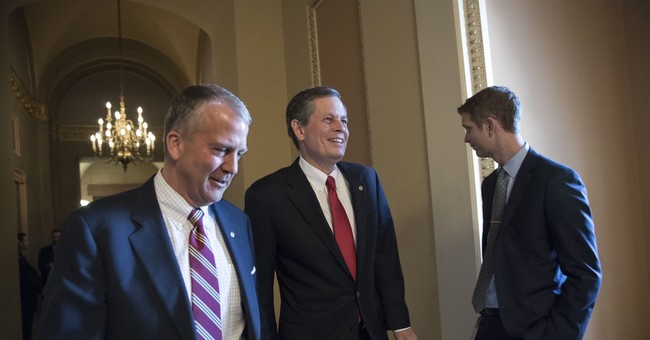 A substantial group of Senate Republicans issued a pro-life ultimatum to Senate Majority Leader Chuck Schumer (D-NY) on Friday, vowing to oppose legislation that would undermine the Hyde Amendment or other pro-life measures.

The effort in the upper chamber, led by Montana Senator and chair of the Pro-Life caucus Steve Daines (R-MT), follows the lead of House Republicans. The Republican Study Committee (RSC), led by Chairman Jim Banks (R-IN) also wrote to congressional leadership in late January, promising to oppose any and all legislation that aims to weaken the Hyde Amendment.

Daines is joined by 47 Republican Senators on the letter to Schumer, citing the historic bipartisan support for the Hyde Amendment.

“We are united in our resolve to guard against any changes to Federal law that would unsettle nearly half a century of bipartisan consensus against taxpayer funding for abortion on demand, or otherwise threaten the lives of unborn children,” the lawmakers write. “Accordingly, we are committed to vote against the advancement of any legislation that would eliminate or weaken the Hyde Amendment or any other current-law pro-life protections, or otherwise undermine existing Federal pro-life policy.”

A growing faction of the Democratic Party seeks to scrap the Hyde Amendment, in exchange for taxpayer-funded abortion. President Biden has taken a fluid stance on the measure, which he once championed during his time in the Senate. His administration recently reversed a similar rule, the Mexico City Policy, which protects taxpayers from funding abortions overseas.

2 Replies to “Led by Steve Daines, Senate Republicans Vow to Go to Bat For the Hyde Amendment”