Are these people out of their minds? Of course they are. Crazy, loony, evil, and destructive. 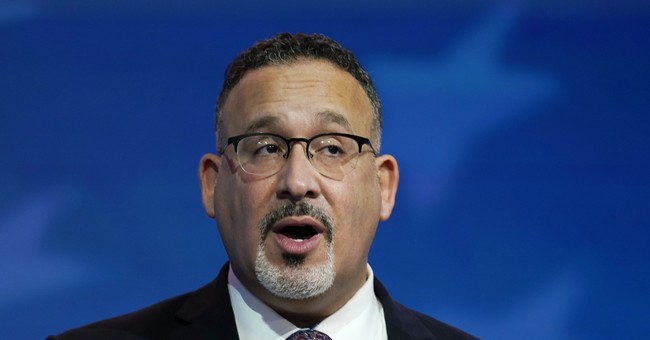 President Joe Biden’s nominee to lead the Department of Education, Dr. Miguel Cardona, said he will work to protect a new executive order that mandates biological males be allowed to compete against biological females. Specifically, he will work to make sure the practice is allowed in high schools, where female athletes are often stripped of scholarship opportunities and athletic titles after being forced to compete against biological men.

“What do you think in general about boys running in girls track meets, like they’ve been doing in Connecticut?” Republican Senator Rand Paul asked during Cardona’s confirmation hearing on Capitol Hill.

“I think it’s critically important to respect the rights of all students, including students who are transgender, and that they are afforded the opportunities that every other student has to participate in extracurricular actives,” Cardona responded.

“Does it bother you that the top 20 percent of boys running in track meets beat all of the girls in the state? And that it, you know, will completely destroy girls athletics? The girls are being pushed out. If they don’t make the finals in the state meet, they don’t get college scholarships, that it’s really detrimental to girls sports. Do you worry about having boys running in girls track meets?” Paul followed up. “Do you think it’s fair?”

“I recognize and appreciate the concern and the frustrations that are expressed,” Cardona said. “I think it’s appropriate for, it’s the legal responsibility of schools to provide opportunities for students to participate in activities and this includes students who are transgender.”

“So you don’t have a problem then with boys running in the girls track meet, swimming meets, name it. You’re okay then with boys competing with girls?” Paul asked.

“I believe schools should offer the opportunity for students to engage in extracurricular activities, even if they are transgendered. That is their right,” Cardona said.

This policy has been a major focus in Connecticut where a number of female athletes are suing.  See this video:

5 Replies to “What Insanity is This? Biden’s Education Secretary Nominee: Biological Males Have a Right to Compete Against Girls in Sports”