What looks like garbage is a type of colorful coastal coral. 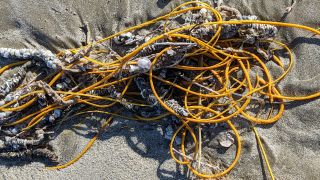 The colorful sea whip (Leptogorgia virgulata) is often mistaken by beachgoers for a tangle of cable or rope.(Image: © R. Claussen/National Park Service)

A tangled mass of what looked like discarded yellow rope recently washed up on a beach in Texas. But this peculiar knotty pile wasn’t garbage. It was a colorful sea whip — a type of soft, flexible coral.

Rebekah Claussen, a National Park Service (NPS) guide at the Padre Island National Seashore near the Gulf of Mexico, found one of these “rope balls” partly buried in the sand, and the park shared her photo on Facebook on Feb. 1.

Sea whips can be red, yellow, orange, violet, lavender or purple, according to the Marine Species Identification Portal. However, “we mostly see the yellow and red varieties washing up on our beaches,” NPS representatives wrote in the Facebook post.

Related: 13 bizarre things that washed up on beaches

The term “sea whip” can refer to several genera of soft corals in the order Gorgonacea, but the species that washes up in North American coastal regions is a colorful sea whip (Leptogorgia virgulata). Sea whips’ vibrant color comes from colonies of polyps — tiny, soft-bodied animals with eight tentacles forming a ring around their mouths. When these colonies cluster together they secrete proteins that form a dark-colored skeleton, which branches into whiplike stalks measuring up to 3 feet (0.9 meters) tall, according to the Tybee Island Marine Science Center (TIMSC) in Georgia.

Colorful sea whips live close to the shore, and L. virgulata can be found in waters as far north as New Jersey and as far south as the Gulf of Mexico, according to TIMSC. Polyps feed on plankton, and sea whips typically cling to ledges made of rock and limestone at depths between 10 and 66 feet (3 and 20 m), according to the Smithsonian Marine Station at Fort Pierce in Florida.

8 Replies to ““Pile of Rope” on a Texas Beach is a Weird, Real-life Sea Creature – Cool!”