That’s a scary thought, huh? This nasty old witch from my part of the world (embarrassing to say that) with her anti-Americanisms and inciteful speeches…but this article exhibits a number of nutball lefties in full form… 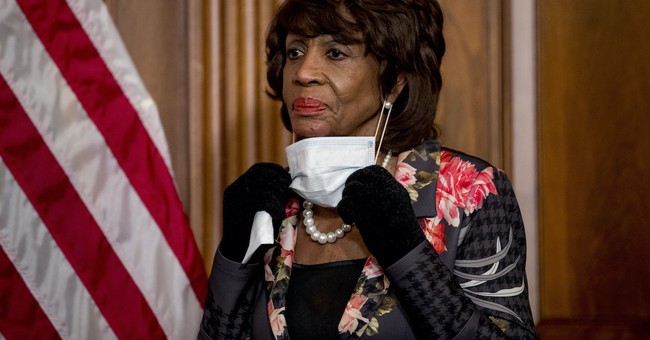 According to The New York Times (and when have they ever been wrong about anything?), the Republican Party is now firmly in the control and sole identification of a freshman congresswoman from Georgia who has been on the job for four weeks and literally has no influence or responsibilities other than to the voters of her district who just elected her.

Rep. Maxine Waters was present at an event honoring Louis Farrakhan, the foremost purveyor of hate speech in America. Farrakhan has referred to the Jewish people as “his enemy,” has said he “pulled the cover off that satanic Jew,” and has said of the Jewish people, “Your time is up, your world is through.”

Waters also famously called on her supporters to harass Trump supporters with language that sounds suspiciously like “incitement” or, at the very least, a hell of a lot more like incitement than anything President Trump said on or before January 6.

“Let’s make sure we show up wherever we have to show up,” Waters told a crowd in California in 2018. “If you see anybody from that Cabinet in a restaurant, in a department store, at a gasoline station, you get out, and you create a crowd, and you push back on them, and you tell them they’re not welcome anymore, anywhere.”

Mind you, this was just one year after several of her colleagues in the House of Representatives were shot and wounded by a crazed Left-winger inspired by the hateful lies put out by Sen. Bernie Sanders and other Democrats.

And just one year later, as Rep. Steve Scalise was still recovering from his gunshot wounds, Maxine Waters, Farrakhan apologist, encouraged her supporters to “create a crowd” and “push back” on her political opponents.

Or, now that I think about it, it’s Ilhan Omar’s Democratic Party now.

Omar, who has downplayed the terror attacks of September 11, singled out Israel as a foreign country with powerful influence in American politics and claimed it was “all about the Benjamins.” She’s also embroiled in a financial scandal over her campaign funneling more than $2 million to her new husband’s political consulting business.

AOC is an avowed socialist who resembles nothing of the Party of Jefferson and Jackson (or of Carter and Clinton for that matter.) She isn’t a Democrat; she’s a socialist whose Green New Deal would cripple our economy and way of life, whose economic policies would virtually end the free market as we know it. She would abolish ICE and all forms of immigration enforcement, and she wants to defund the police.

No, really, it is AOC’s Democratic Party now; just look at its platform and legislative agenda.

Or how about Hank Johnson, who thinks Guam will tip over?

Or Shiela Jackson Lee, who thinks the constitution is 400 years old and that we put a man on Mars?

Or Eric Swalwell, who is wrapped up in a…let’s call it “an entanglement,” with a Communist Chinese spy while he sits on the Intelligence Committee?

We could go on and on with Democrats who are an utter embarrassment if not downright dangerous who could easily be tagged as the face and ideological standard-bearers of the Democrats.

This isn’t an exercise in “what-about-ism.” It is an exercise in the clear double-standard in American politics and media when it comes to an elected official’s bizarre, controversial, and even dangerous positions and rhetoric.

I make no defense of Rep. Taylor Greene, that’s not my job. Surely she can defend herself. She’s a member of Congress, after all.

The focus here is on the outrageous tactic to divide the Republican Party and Republican voters by determining that this one, frankly, inconsequential freshman backbencher now defines the Republican Party and the conservative movement. And let’s also call out the inconceivable ability of Republican leaders to willingly walk into the trap of this false premise and anoint themselves with fake praise and adulation for condemning a Republican without ever raising concerns over anti-Semitic, corrupt, socialist Democrats.

Hey Republicans, stop playing their game. You don’t think that once they get rid of Taylor Greene, they won’t bring forward their entire list of Republicans you must condemn? Jim Jordan? Matt Gaetz? Luis Gohmert? Steve Scalise? Kevin McCarthy? Do you think there are any Republicans they don’t find objectionable?

Maxine Waters is Chairwoman of the House Financial Services Committee. She literally has direct influence over critically important legislation and influence over House leadership and the Democrats’ agenda.

Ilhan Omar is a shining star of the Democratic Party who helps raise money for countless members of Congress. Her influence is so broad that she single-handedly wrestled Speaker Nancy Pelosi away from pushing a resolution condemning anti-Semitism and forced the language to include “Islamaphobia, racism and other forms of bigotry.”

Alexandria Ocasio Cortez pushed Medicare for All, the forgiveness of student loans, and the Green New Deal in her first two years in office, and those three issues (socialist all) became the foundational debate of the 2020 primary season as well as the basic framework of the DNC platform, thus moving Joe Biden from his “moderate” career into a Bernie Sanders-like persona.

That’s incredible power and influence from all three of these problematic individuals.

Taylor Greene is none of those things and has none of that power and influence.

One last question: What is really more damaging to the country and your life and your children’s future? Taylor Greene’s bizarre rantings on Q-Anon or the sprint toward full-on socialism in our country?

This evil, deranged sh*thead must be removed from office.