By By Harry Baker – Staff Writer for LiveScience

Scientists have uncovered some of its basic chemical properties for the first time. 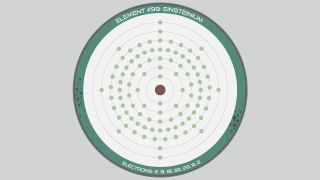 Named after Albert Einstein, the chemical element einsteinium has 99 electrons swirling around its nucleus.

Scientists have successfully studied einsteinium — one of the most elusive and heaviest elements on the periodic table — for the first time in decades. The achievement brings chemists closer to discovering the so-called “island of stability,” where some of the heftiest and shortest-lived elements are thought to reside.

The U.S. Department of Energy first discovered einsteinium in 1952 in the fall-out of the first hydrogen bomb test. The element does not occur naturally on Earth and can only be produced in microscopic quantities using specialized nuclear reactors. It is also hard to separate from other elements, is highly radioactive and rapidly decays, making it extremely difficult to study.

Researchers from the Lawrence Berkeley National Laboratory (Berkeley Lab) at the University of California, recently created a 233-nanogram sample of pure einsteinium and carried out the first experiments on the element since the 1970s. In doing so they were able to uncover some of the element’s fundamental chemical properties for the first time.

Elementary, my dear: 8 elements you never heard of

Physicists know almost nothing about einsteinium.

“It is hard to make just because of where it is in the periodic table,” co-author Korey Carter, an assistant professor at the University of Iowa and former scientist at Berkeley Lab, told Live Science.

Like other elements in the actinide series — a group of 15 metallic elements found at the bottom of the periodic table — einsteinium is made by bombarding a target element, in this case curium, with neutrons and protons to create heavier elements. The team used a specialized nuclear reactor at the Oak Ridge National Laboratory in Tennessee, one of the few places in the world where einsteinium can be made.

However, the reaction is designed to make californium — a commercially important element used in nuclear power plants — and so it makes only a very small amount of einsteinium as a byproduct. Extracting a pure sample of einsteinium from californium is challenging because of similarities between the two elements, which meant the researchers ended up with only a tiny sample of einsteinium-254, one of the most stable isotopes, or versions, of the elusive element.

“It is a very small amount of material,” Carter said. “You can’t see it, and the only way you can tell it is there is from its radioactive signal.”

However, getting the einsteinium is only half the battle. The next problem is finding a place to keep it.

Einsteinium-254 has a half-life of 276 days — the time for half of the material to decay — and breaks down into berkelium-250, which emits highly damaging gamma radiation. Researchers at Los Alamos National Laboratory in New Mexico designed a special 3D-printed sample holder to contain the einsteinium and protect the Berkeley Lab scientists from this radiation.

However, the element’s decay also created other problems for the researchers.

“It’s decaying consistently, so you lose 7.2% of your mass every month when studying it,” Carter said. “You have to take this into account when you are planning your experiments.”

The team at Berkeley Lab was used to dealing with other elements with short half-lives. Even so, the team began their work just before the outbreak of the COVID-19 pandemic, which meant that they lost valuable time and were unable to complete all the planned experiments.

The main finding from the study was the measurement of the einsteinium bond length — the average distance between two bonded atoms — a fundamental chemical property that helps scientists predict how it will interact with other elements. They found that einsteinium’s bond length goes against the general trend of the actinides. This is something that had been theoretically predicted in the past, but has never been experimentally proved before.

Compared with the rest of the actinide series, einsteinium also luminesces very differently when exposed to light, which Carter describes as “an unprecedented physical phenomenon.” Further experiments are needed to determine why.

The new study “lays the groundwork for being able to do chemistry on really small quantities,” Carter said. “Our methods will allow others to push boundaries studying other elements in the same way.”

The team’s research could also make it easier to create einsteinium in the future. In that case, einsteinium could potentially be used as a target element for the creation of even heavier elements, including undiscovered ones like the hypothetical element 119, also called ununennium. One of the ultimate goals for some chemists would be to then discover hypothetical superheavy elements that have half-lives of minutes or even days — meaning they “live” on this island of stability — compared with the microseconds at most for the half-lives of other heavy elements.

The study was published online Feb. 3 in the journal Nature.

From Around the Globe…

LOVE IS THE THEORY OF EVERYTHING!

GIVE ME LIBERTY OR GIVE ME DEATH

THEY TOOK THIS DOWN AS SOON AS IT WAS POSTED. SHARE WITH EVERYONE YOU KNOW.

A YOUNG MAN’S TAKE ON RUSSIA AND UKRAINE

TOM MACDONALD AND FRIENDS — IN GOD WE TRUST

HUGE BREAKING DEVELOPMENT: THE COPS IN FRANCE HAVE FLIPPED & ARE NOW MARCHING WITH WE THE PEOPLE

HOW TO SURVIVE A CYBER ATTACK TAKEDOWN OF AMERICA

THE BEST IS YET TO COME: STEW PETERS REVEALS PLAN TO TAKE DOWN THE GLOBAL MEDIA

TED NUGENT – ON THE PEOPLE’S CONVOY: “I’VE GOT MY OWN TRUCK AND I’M GOING TO JOIN THESE TRUCKERS.”

BRILLIANT! WITH ONE CLICK, OVER 1 MILLION AMERICANS WILL CONTACT CONGRESS OVER NEXT 24 HRS TO DEMAND THEY DEFUND BIDEN’S VAX MANDATES…HERE’S HOW YOU CAN HELP IN UNDER 30 SECONDS!

‘SHOCK OF A LIFETIME’: MOM GIVES BIRTH TO NATURAL QUADRUPLETS WITH 1 IN 700,000 ODDS

AS THE FATE OF AMERICA HANGS IN THE BALANCE, THE LEVEL OF EVIL IS OFF THE CHARTS

HOUSE OF CARDS. RANK & FILE TESTIFYING? MANY GAVE UP. MANY ARE FALLING! PRAY!

DOCTOR: BEST WAY TO DEAL WITH IRRATIONAL FEAR OF VIRUS

TEN ARTICLES ABOUT THE US FREEDOM TRUCKER CONVOY

THE WORD OF GOD

1ST DOZEN ARTICLES, VIDEOS AND FEATURES ABOUT THE CANADIAN TRUCKERS

2ND DOZEN ARTICLES, VIDEOS AND FEATURES ABOUT THE CANADIAN TRUCKERS

3RD DOZEN ARTICLES, VIDEOS AND FEATURES ABOUT THE CANADIAN TRUCKERS

2ND DOZEN ARTICLES ON THE “VIRUS” AND THE “VACCINE”

3RD DOZEN ARTICLES ON THE “VIRUS” AND THE “VACCINE”

4TH DOZEN ARTICLES ON THE “VIRUS” AND THE “VACCINE”

5TH DOZEN ARTICLES ON THE “VIRUS” AND THE “VACCINE”

6TH DOZEN ARTICLES ON THE “VIRUS” AND THE “VACCINE”

7TH DOZEN ARTICLES ON THE “VIRUS” AND THE “VACCINE”

8TH DOZEN ARTICLES ON THE “VIRUS” AND THE “VACCINE”

JETHRO TULL’S “THE ZEALOT GENE” IS RICH WITH ZEST

SEVENTEEN ARTICLES ABOUT YOUR RIGHTS, CENSORSHIP, WOKISM, RACISM AND THE MEDIA

SIX ARTICLES ABOUT BUSINESS AND THE ECONOMY

LOTS OF GREAT STUFF FROM SIDNEY POWELL AND DEFENDING THE REPUBLIC

1ST SET OF TEN ARTICLES ABOUT POLITICS POLITICS IN GENERAL

2ND SET OF TEN ARTICLES ABOUT POLITICS POLITICS IN GENERAL

3RD SET OF TEN ARTICLES ABOUT POLITICS IN GENERAL

4TH SET OF TEN ARTICLES ABOUT POLITICS IN GENERAL

TEN ARTICLES ABOUT THE DURHAM PROBE

NINE ARTICLES ON THE 2020 ELECTION AND AUDITS AND RELATED

‘THAT MOMENT YOU DREAM OF’: TENNESSEE TEEN WITH DOWN SYNDROME SHOWS HIS SKILLS ON SENIOR NIGHT

SEVEN ARTICLES ABOUT ABORTION AND RELATED

THREE NEW VIDEOS FROM PRAGER U

ISRAEL’S ‘DEEP STATE’ IS BEING EXPOSED

THIRTEEN ARTICLES ABOUT FAITH AND RELIGION

POLISH SISTERS SEPARATED BY HOLOCAUST FIND EACH OTHER AFTER 80 YEARS

SIX ARTICLES ABOUT CHINA AND THE CCP

FIRST SET OF TEN ARTICLES ABOUT CRIME AND LEGAL ISSUES

SECOND SET OF TEN ARTICLES ABOUT CRIME AND LEGAL ISSUES

ELEVEN ARTICLES ABOUT EDUCATION AND RELATED

THREE ARTICLES ON THE BORDER CRISIS

THE HISTORY OF PSYOPS

A LETTER FROM GOD

OVER 10,000 CANADIAN, US TRUCKERS PROTEST MANDATE

ALL THE TRUTH BOMBS DROPPED IN DC ON SUNDAY – IT’S TIME TO BRING JUSTICE AGAINST THE ENEMIES OF THE PEOPLE! (VIDEO)

COME ON MAN! [THE BALLAD OF SLEEPY JOE]

WE ARE WATCHING THE MASS MURDER OF MILLIONS WARNS DR. MALONE IN EXCLUSIVE INTERVIEW

HOSPITAL GREED IS DESTROYING OUR NURSES. HERE’S WHY.

KID ROCK: WE THE PEOPLE

5G POWERED GRAPHENE BASED NANO-TECH IN THE PFIZER VACCINE

INVESTIGATORS REVEAL CULT, MURDER, AND SPIES AROUND PHOTOS OF ‘CHINESE TROOPS’ IN CANADA

THE UNSPEAKABLE (TRUTHS ABOUT 9/11)

ASTRONOMY PICTURE OF THE DAY

[MUST-WATCH] THIS IS A GREAT START! IT’S NOW OFFICIAL… HUGE BREAKING EXCLUSIVE: ROUGHLY 40% OF THE VOTES IN PENNSYLVANIA DURING THE 2020 ELECTION WERE FRAUDULENT

THERE COMES A TIME WHEN TIME RUNS OUT

100 QUESTIONS THEY DON’T WANT TO ANSWER

1ST SET OF ELEVEN ARTICLES ABOUT CANADIAN TRUCKERS’ MOVEMENT PLUS

LOTS AND LOTS OF TERRIFIC STUFF FROM THE BABYLON BEE

1ST DOZEN (OF FOUR DOZEN) ARTICLES ABOUT POLITICS IN GENERAL

FIFTEEN ARTICLES ON FAITH AND RELIGION

PHOTOGRAPHER SHOWCASES WORLD’S LARGEST ABBEY LIBRARY, ‘ONE OF THE MOST MAGICAL PLACES’

NINE ARTICLES ABOUT COMMUNISM, SOCIALISM, AND THE DEEP STATE

2ND DOZEN ARTICLES AND VIDEO ABOUT THE “VIRUS” AND THE “VACCINE”

3RD DOZEN ARTICLES AND VIDEO ABOUT THE “VIRUS” AND THE “VACCINE”

4TH DOZEN ARTICLES AND VIDEO ABOUT THE “VIRUS” AND THE “VACCINE”

5TH DOZEN ARTICLES AND VIDEO ABOUT THE “VIRUS” AND THE “VACCINE”

6TH DOZEN ARTICLES AND VIDEO ABOUT THE “VIRUS” AND THE “VACCINE”

TEN ARTICLES ABOUT THE BORDER CRISIS

RUMORS OF WAR BY HAL LINDSEY

FIVE ARTICLES ABOUT CHINA AND THE CCP

TEN ARTICLES ABOUT CENSORSHIP AND PRIVACY AND YOUR RIGHTS

AN EXISTENTIAL THREAT TO HUMANITY?

FOURTEEN ARTICLES ABOUT THE 2020 ELECTION AND AUDITS

FROM SIDNEY POWELL AND DEFENDING THE REPUBLIC

SIX ARTICLES ABOUT ABORTION AND RELATED

THREE ARTICLES ABOUT JANUARY 6 AND RELATED

TWO ARTICLES ABOUT THE ENVIRONMENT

FOUR ARTICLES ABOUT BUSINESS AND THE ECONOMY

FIVE ARTICLES ABOUT PEDOPHILIA AND PORNOGRAPHY AND SEXUAL ISSUES