By By Paul Sutter – Astrophysicist for livescience.com 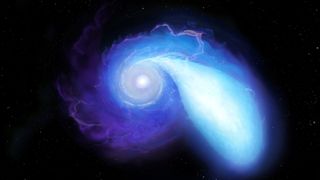 Neutron stars are essentially city-size atomic nuclei composed of individual neutrons crammed together just about as tightly as possible. Shown here, an illustration of a neutron star whose gravity is distorting its neighbor, a white dwarf star.(Image: © Mark Garlick/Getty Images)

The universe may be filled with “mirror” particles — and these otherwise-undetectable particles could be shrinking the densest stars in the universe, turning them into black holes, a new study suggests.

These hypothetical evil twins of ordinary particles would experience a flipped version of the laws of physics, as if the rules that govern known particles were reflected in a looking glass. According to a new study, published in December 2020 in the preprint database arXiv but not yet peer-reviewed, if these particles exist, they would be shrinking the densest stars in the universe into black holes.

Through the looking glass

Several fundamental symmetries in nature give rise to the laws of physics. For example, the ability to move an experiment or interaction in space and have the same outcome leads to conservation of momentum.

But not all forces play along. The violator of reflection symmetry (also known as mirror symmetry, P-symmetry or parity) is the weak nuclear force. Whenever the weak force is involved in some particle interaction, the mirror image of that interaction will look different. The classic experiment that first detected this effect found that when a radioactive version of cobalt decays, the electron it emits prefers to go in one direction (in particular, opposite the direction of the spin of the cobalt), rather than any random direction. If the weak nuclear force obeyed reflection symmetry, then those electrons shouldn’t have “known” which direction is which, and popped out anywhere they please.

Physicists have no idea why the mirror symmetry is broken in our universe, so some have proposed a radical explanation: Maybe it’s not broken at all, and we’re just looking at the universe the wrong way.

You can rescue mirror symmetry if you allow for the existence of some extra particles. And by “some,” I mean “a lot” — a mirror-image copy of every single particle. There would be mirror electrons, mirror neutrons, mirror photons, mirror Z bosons. You name it, it’s got a mirror. (This is different from antimatter, which is like normal matter but with opposite electric charge.)

The heart of the star

But how can scientists test this radical idea? Because the only force that violates mirror symmetry is the weak nuclear force, that’s the only force that can provide a “channel” for regular matter to communicate with its mirror counterparts. And the weak force is really, really weak, so even if the universe were flooded with mirror particles, they’d be barely detectable.

Many experiments have focused on neutral particles, like neutrons, because they don’t have electromagnetic interactions, thereby making the experiments easier. Searches for mirror neutrons haven’t turned up anything yet, but all hope is not lost. That’s because those experiments have taken place on Earth, which doesn’t have a superstrong gravitational field. But theoretical physicists predict a very strong gravitational field can enhance the connection between neutrons and mirror neutrons. Thankfully, nature has already crafted a far superior experimental device to hunt for mirror matter: neutron stars.

Neutron stars are the leftover cores of giant stars. They are extraordinarily dense — a single teaspoon of neutron star material would outweigh the Great Pyramids — and extremely small. Imagine cramming 10 suns’ worth of material into a volume no bigger than Manhattan.

Neutron stars are essentially city-size atomic nuclei composed of individual neutrons crammed together just about as tightly as possible.

With that incredible neutron abundance, coupled with the extreme gravitational field (the tallest “mountains” on neutron stars are barely a half inch  high), weird things are bound to happen. One of those things, the new study proposes, is neutrons occasionally turning into their mirror neutron counterparts.

It’s like going to a crowded football game and slowly replacing the fans with cardboard cutouts: The stadium is still filled, but the energy is gone.

Neutron stars can hold themselves up from the crushing weight of their own gravity by a quantum mechanical process called degeneracy pressure. But that pressure has a limit, and with fewer regular neutrons, that limit shrinks. If a star had a 1:1 ratio of ordinary neutrons to mirror neutrons, the maximum mass of neutron stars in the universe would be about 30% less massive than what we would normally expect. More massive than this, and neutron stars would collapse into black holes.

Scientists have observed neutron stars bigger than this, which at first glance might mean that mirror matter is a dead-end idea (and we have to find some other explanation for mirror symmetry violation). But the case isn’t closed: The universe is only so old (13.8 billion years), and we have no idea how long this changeover process can take. It’s possible there just hasn’t been enough time for the neutron stars to make the switch.

The cool thing about neutron stars is that scientists are looking at them all the time. By finding and observing more neutron stars, they might just find a sign in any of those signals that there’s a hidden, mirror — and dare I say “evil”? — sector of the universe.